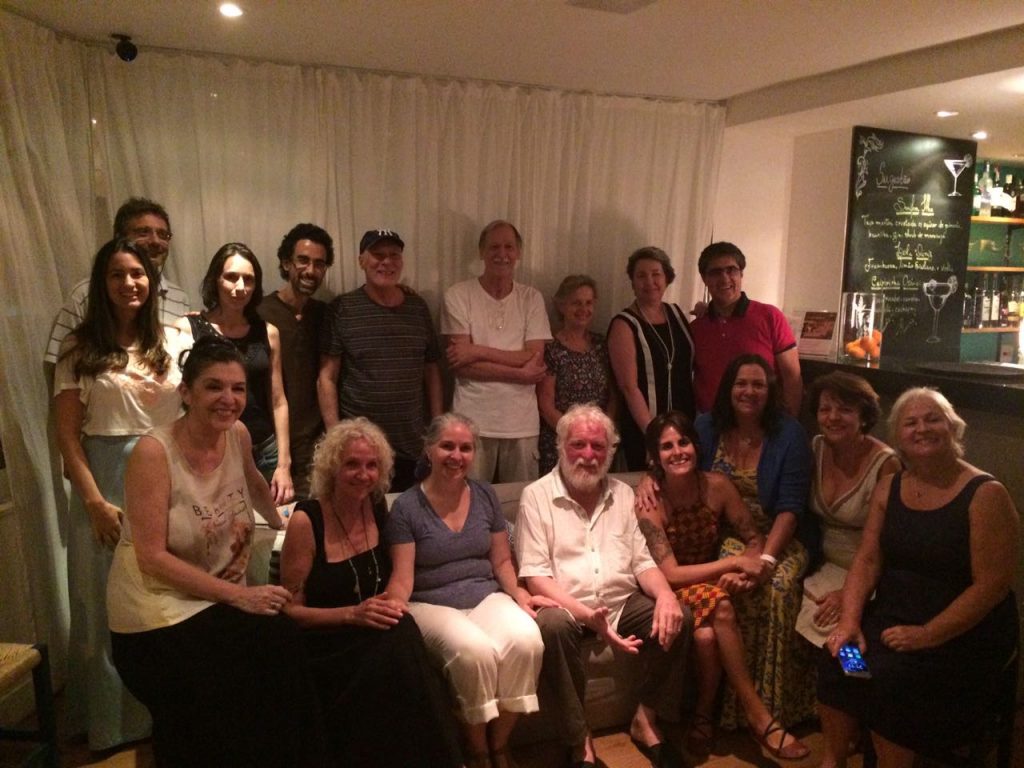 The path that took me to the Peter Hess Sound Massage was personal. I left Rio de Janeiro for Lisbon, Portugal, in 2007 to get married and reside, and there, a year later, was introduced to Peter Hess Academy – Portugal, at the 2008 Alternative Fair. Right after the fair entry, there was a very large stand that called my attention, as it had Gongs, Singing Bowls, some professionals offering 15 minutes appointments, and a very long line of people waiting for their turn. This was not extraordinary, except that the Fair had already ended, some stands were being disassembled, but people refused to leave without receiving a Sound Massage!

I didn’t manage an appointment that day, but I grabbed a folder and when arriving home opened the site and read what it was all about, thought it very cool, and immediately inscribed myself in the training course. Music has always been part of my life, since childhood, when for 11 years I studied the piano, and was graduated at 18. Although I had stopped playing some time after this, I never lost contact with music, and when I got through Grade 1, I felt like I already knew those sounds since a long time before, and perceived how far I was from my essence… Having done the course was like “going back home”. 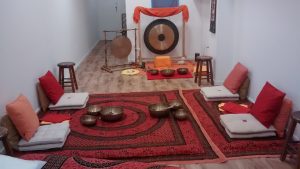 I fell in love with Peter Hess Sound Massage, I gave up being a librarian and dedicated myself to finishing the Basic Sound Massage Training during 2009, so as to be able to work doing Sound Massages once back in Brazil, in 2010. That was when I received an invitation by Ingrid Ortelbach, Peter Hess Academy – Portugal Director – my teacher and who became a great and much loved friend –, to try and take the Peter Hess Sound Massage courses to Brazil. She had already tried to do so unsuccessfully, twice, and said it would be the third and last time she would try. I asked for time to think about the proposal, as my intention was only do appointments. But Sound Massage is so wonderful, and with the courses I could benefit so many people, that I decided to accept the challenge and spent the entire 2009 year being prepared at the Peter Hess Academy – Portugal, at the same time I was finishing the Basic Training.

Right after my arrival to Rio de Janeiro, in July 2010, there was a class ready to receive Ingrid in September, as they had been willing to go to Portugal to take the Intensive Course she was going to minister at the time. So, this was our first class in Brazil and we were happy about this! It was a great success! 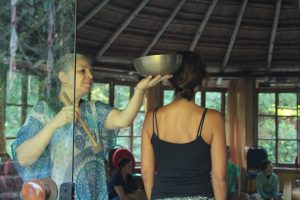 Peter Hess Academy – Brazil was created in 2013, and the Peter Hess Sound Massage courses have been continuously occurring in Brazil for 8 years, until 2016 together with Ingrid Ortelbach, and since 2015, Bianka Petzelberger, a Peter Hess Institute Trainer, who has been coming to Fortaleza, CE, to give training courses, and who at present is our partner, the same as Ingrid.

We are almost 200 people in the continent, from first grade students up to practitioners, who are present in 14 Brazilian States, and in 6 different countries: Uruguay, Mexico, Panama, Australia, Germany and France. Issues such as the difficulty to import working material (singing bowls and gongs), which when entering Brazil receive a very high taxation (around 80%), and the gradual ascent of the Euro value (currently 1 Euro is worth around R$ 5,00 – our minimum working wage is R$1,000,00 for understanding the price equivalence), are daily challenges that we have to win to continue bringing Peter Hess Sound Massage to an ever growing number of people, spreading the seeds of sound in our country. 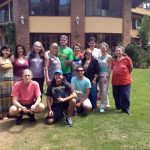 Since 2012 we have participated in Holistic Fairs, of events at private and public companies, where we have been noticed for the singularity of the Sound Massage, of its deep relaxation, and the immediate feeling of well-being it brings, beside all other effects and benefits. There have been invitations for interviews on radio programs and in magazines.

In 2015, we brought Angelika Rieckmann’s Sound Massage in Neurology and Psychosomatic Course, which was a great victory for us, as, due to the language barrier, we do not have access to many interesting courses, all given in German, which need simultaneous translation. Angelika accepted the challenge to give the course in English, and it was awesome! 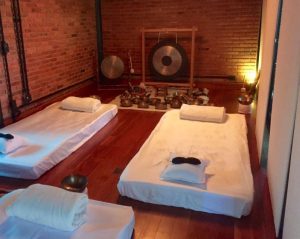 In 2016, we had the great opportunity to participate in the Olympic Games, headquartered in Rio de Janeiro, and were able to offer Sound Meditation sessions to 260 top athletes and/or coaches, of more than 30 countries. This was an unforgettable and very important experience, where we could help to widespread Peter Hess Academies from other countries.

In January of 2017 we were visited by Peter and Emily Hess, when during a worldwide cruise, their ship stopped in 3 different ports, in the cities of Recife, PE, Salvador, BA, and Rio de Janeiro, RJ. 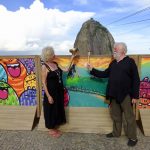 It was a unique chance to receive the Sound Massage creator in Brazil, and we were able to entertain them together with our students and Practitioners in each one of these cities, taking the couple sightseeing and showing then a little of the culture of each place. In Rio de Janeiro we were able to congregate a larger number of people in a special and very pleasant and lively meeting in front of the Arpoador Beach, where all were able to ask questions, “to drink a bit from the source”, and all took the opportunity to take photos and to talk.  It was a longer stop, and the couple was able to be entertained by us for one and a half days! 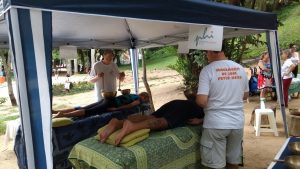 Also in 2017, we created an ever-moving event in public and private spaces, called “Gratitude Day”. The idea was born in 2015, as I had the intention to thank for all the good that Peter Hess Sound Massage brought into my life and 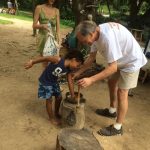 the life of the people who came to me seeking appointments, offering once a month, in the weekend, 15 minutes free appointments to help widespread the method, taking it to the largest number of people each time. I was able to carry out this project only two years later, with the aid of a group of students and Practitioners who also had this idea, when we aligned to accomplish this. There were 12 months of much practice, fellowship, team spirit, grateful experiences, perseverance and much amusement!

Also in 2017, in June, another wonderful opportunity arose for a very rewarding voluntary work with Parkinson patients from the Carioca Parkinson Association (APC), where two Practitioners and I offer Sound Massage during the morning on a weekly basis. The demand of interested parties is great, but unfortunately we do not have enough people to be able to take care of all of the associates every week. We began a Pilot Research Project to evaluate the impact of the Peter Hess Sound Massage against anxiety, in daily life activities, in aiding walking. It’s first stage is completed and we must still carry out and conclude the second stage during the second semester of this year. Only after this a comparison will be able to be made to evaluate results more effectively.

During 2018, Peter Hess Academy – Brazil participated of the 1st International Congress of Integrative and Complementary Practices and Public Health and of the III. International Ayurveda Congress, presenting a speech “Peter Hess Sound Massage in basic care for Parkinson disease patients”. It was a golden opportunity for the Peter Hess Sound Massage in Brazil, and we had an unimaginable visibility, where besides the speech, also we offered 15 minutes 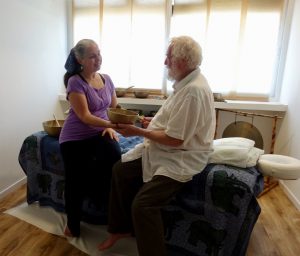 appointments so the participants had the chance of being introduced to the method’s benefits. We were so successful that we were invited to participate in the following congress day for another period of appointments, which generated a very positive impact in the Health Ministry, who incentivized us, from its coordination, to participate in meetings of the National and Municipal Integrative and Complementary Health Practices Network, as to include us, Peter Hess Sound Massage, in the process of inclusion in the National Public Health Network. We are now taking the necessary measures to be included in this process.  New participants will be medium or long term. This year 10 new Integrative practices were included. There are currently 29 different practices included in the National Public Health Network and in the near future we hope to be one of them.

This is the trajectory of the Peter Hess Academy – Brazil up to now, much new and interesting opportunities are arising, expect more new features in 2019!

I am immensely grateful to Ingrid Ortelbach for having taught me the Sound Massage with all her heart, and for having invited me to bring the courses to Brazil. My life has changed since then in a way I never could have imagined, for the very much better. So, in the end, I understood why I had gone to Portugal: to find my path, my purpose in life, which is aligned beautifully with my intention of soul! I am very happy doing what I do, and I can’t imagine myself doing anything else in life!